After watching the following video by Joey over at the The PhysicalEducator.com discussing the Sport Education Model, I was compelled to share my own experiences using the model in my Phys Ed classroom. For those unfamiliar, SEPEP is an approach towards teaching physical education that aims to maximise involvement and deepen understanding of sports by giving students dedicated roles outside of just participation. It seeks to develop leadership and other interpersonal skills valuable to all aspects of life.  Heres an example of how it worked in a recent volleyball unit.

Step 1 – The class of 18 students were broken into teams of 6, like the example below. Note you could do this for any sport and any number of teams. 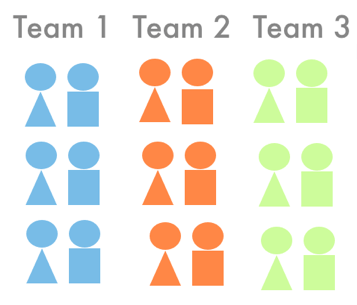 Step 2 –  Each member of the team was then given a specific letter, which was associated with a particular job. (See below)

(A) Coach – Each team has a dedicated coach (usually a high level performer), who runs the warm-ups and completes the half time addresses. The coach is also responsible for meeting with the teacher at the start of each session to be briefed on the session plan.

(B) Publicity Manager – Who utilises a class twitter account or other social media platforms during the course of the games to keep an up to date account of scores, anecdotal events and other team related information. Imagine how impressive it woud be to look back over a years worth of tweets at the end of a unit.

(C) Film Crew – Using a iPad/Flip Camera students involved in this job are charged with the task of producing and editing a video of the different highlights from the sport. With an app like ‘iMovie’ the filming and editing can be done all from the device and then shared via YouTube or another video sharing service.

(D) Statistics – By utilising the TimeMotion or Easy Tag apps for iPhone/iPad the students involved in this job are responsible for providing game statistics to the coaches.

(E) Umpire – An umpire for each team is responsible for learning the basic rules and assisting the teacher in the smooth running of games.

(F)Timekeeper/Scorer/Draws- Obvious job which was assisted with the PocketScore Board App. This would also involve filling out the official results sheet and submitting it to the teacher.

Step 3 –  After the roles of each team member have been identified the tournament/round robin can begin. Depending on the number of teams you have, determines the amount of teams which will be on the sidelines involved in their jobs. In the example above their was only one volleyball court, which meant that Team 1 and Team 2 played, while Team 3 was involved in completing their off field jobs as mentioned above. This essentially means that all students are heavily involved in the smooth running of the game.

For the second round the teams swap so that Team 1 is now playing Team 3, with Team 2 involved in their off field jobs. Its important to understand that this SEPEP model can work with larger classes, however it will depend on the numbers and available spaces as to how many teams you can accomodate at once.

So go ahead and switch up the SEPEP model with some meaningful modern day  tasks.